I made this recipe a couple of nights ago when we were babysitting our neighbors who are 4 and 6 years old.  They had never heard of falafel so they thought I was serving “waffles.”  They tried it just the same and both asked for seconds!  So here you go, a mother (and dietitian) approved, kid tested recipe!

Why I ever bought just-add-water falafel mix is beyond me, now that I know how good fresh, homemade falafel can be!  I’m not sure why it took me so long?  I guess I had an impression that it was difficult to make, but I couldn’t have been more wrong!   Making it gluten free is really simple and the brown rice flour adds a subtle sweetness.  The middle is moist, while the outside has just the right amount of crunch.  And I’ve been a little spoiled with high quality red pepper flakes brought all the way back from Turkey by my brother and sister in law.  Thanks again! 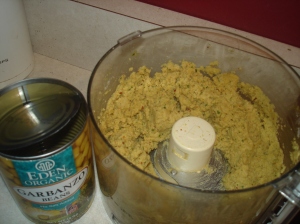 1. Place the drained chickpeas and the onions in the bowl of a food processor fitted with a steel blade. Add the parsley, coriander, salt, hot pepper, garlic, and cumin. Process until blended but not pureed.

2. Sprinkle in the baking powder and flour and pulse. You want to add enough flour so that the dough forms a small ball and no longer sticks to your hands. Turn into a bowl and refrigerate, covered, for several hours.

3. Form the chickpea mixture into balls about the size of walnuts.  Or make patties as shown in the picture.

4. Coat pan with oil. Fry for a few minutes on each side, or until golden brown. Drain on paper towels.  If you don’t want to fry them, you can also broil them on low until crispy on the outside.  In that case, oil your baking sheet and place a few inches from broiler turned to low.  Flip after several minutes to get even browning on both sides.

5. Stuff half a pita (or gluten free wrap) with falafel balls, chopped tomatoes, onion, green pepper and cucumber. Or make a falafel salad and serve over greens. Drizzle with tahina thinned with water or yogurt makes a nice dressing as well.